(Clearwisdom.net) Ms. Frances Milne, a former chairperson of the board of UnitingCare, the social justice arm of the Uniting Church, New South Wales, attended the Falun Gong practitioners’ press conference on June 19, 2006. She also gave a speech at the truth investigation symposium in Parliament. Thereafter, Ms. Milne expressed her wish to take part in the Coalition to Investigate the Persecution of Falun Gong in China (CIPFG), and hoped that in Australia the investigation would be started from checking the sources of the organs used in transplantation surgeries. 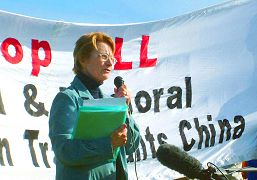 The former Chair of UnitingCare, Ms. Frances Milne wishes to join the CIPFG

Sound of Hope International Radio reported on June 26 that the Uniting Church always helps asylum seekers and detainees. As a member of the church, Ms. Milne met many people from China in detention centers, most of whom were Falun Gong practitioners.

Ms. Milne indicated that her major work is to help those who were concerned about being deported back to a country such as China since they would be put into jail, tortured and forced to give up their beliefs.

Since the exposure of organ removal from living Falun Gong practitioners last March, some people have doubted it, but Ms. Milne firmly believes the authenticity of the situation.

Ms. Milne said: "When you hear it first time, you simply would not believe that a person can treat another like this. People need some time to truly believe the existence of this kind of thing."

She continued: "I believe it because I learned about all kinds of means that the Chinese Communist regime has taken in persecuting Falun Gong, underground churches, or any one opposing the regime. Therefore, I know how brutal those tortures are and how many people were thrown into jail. I hate these kinds of happenings, but I don’t have a reason to doubt it, because the Chinese Communist regime has adopted all kinds of tortures before."

To stop the Chinese Communist regime’s persecution against Falun Gong, the Coalition to Investigate the Persecution of Falun Gong in China is planning to conduct a thorough investigation of the facts of the persecution. Nowadays, peoples from all circles all over the world have joined the team and showed their support. Ms. Milne also indicated to Sound of Hope that she would like to join the coalition, and hopes to start the investigation within the medical circle to find out the sources of the organs used in transplantation.

She said she hoped that all the medical institutions and doctors in Australia involved in organ transplantation learn about the related information. They should be told if the transplanted organs are from China. We suspect that most of the organs are excised from living practitioners, who died as a result.

Ms. Milne said that it was a shame when some doctors questioned the source of the organs but didn’t draw any serious attention to the issue. It is a big concern that many doctors from China are learning organ transplantation in Australian hospitals. She said: "I hope to see an investigation about the source of organs in Australia"