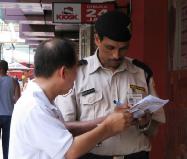 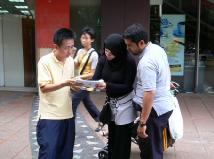 Falun Gong practitioners from Klang City first went to the night market at the center of the city to distribute flyers clarifying the truth of the Sujiatun Concentration Camp and collect signatures on the petition to the World Health Organization (WHO) and International Olympic Committee (IOC), calling for immediate attention to the Chinese Communist Party's harvesting Falun Gong practitioners' organs.

On the following morning, they went to People Park in Klang City to pass out flyers and collect signatures.

When the people doing morning exercises heard about the truth that Chinese Falun Gong practitioners were being inhumanly murdered by the CCP, and the persecution is still going on today, they signed their names one by one. One mother signed her name and then encouraged her children to sign theirs. One girl signed her name and then asked her mother to sign to help the rescue effort. The park staff also signed to support the effort.

On the afternoon of April 2, Falun Gong practitioners from Kuala Lumpur held a signature drive at the bustling Bukit Bintang commercial area. Many Malaysians condemned the Chinese Communist Party's atrocity and called on the international community to help stop the killings.