Clarifying the Truth in Malaysia (Photos)

In order to urgently rescue Falun Gong practitioners being imprisoned in the Sujiatun Concentration Camp, practitioners in Malaysia went to an evening market in Klang City on April 1 to distribute handouts and expose the CCP's atrocities in Sujiatun. They also collected signatures to call on the World Health Organization (WHO) and the International Olympic Committee (IOC) to urgently pay attention to the atrocities in Sujiatun, where practitioners' organs are harvested from them while they are still alive. 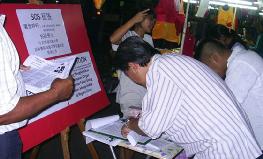 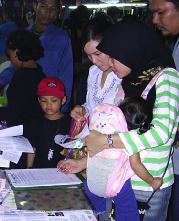 A young mother carrying her baby signs the petition 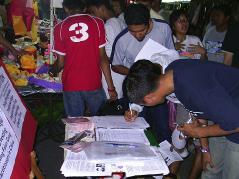 A group of young Malaysians were shocked after finding out the facts. They signed the petition, and then asked a practitioner how they could offer further assistance to rescue the victims. Later, the practitioner gave them a few copies of the signature collection form and asked them to have more people sign the petition. One Malaysian youth suggested that the practitioners go to schools to collect signatures.

Mr. Ye, who had a stall in the evening market and has supported Falun Gong many times, said after hearing about the Sujiatun incident, "The CCP regime continues committing these crimes in the persecution of Falun Gong. In order to have more people know the fact and help to stop the persecution, you should go to each residential area to expose the CCP's crimes in the Sujiatun Concentration Camp."