(Clearwisdom.net) The walls of the modest unit in suburban Auckland, where Huang Juo-Hua and his four-year-old daughter Kaixin live, are almost bare. In the lounge there is only a meagre calendar, and a large photograph of Huang's wife Luo Zhi Xiang, its frame decorated with flowers. There is a whisper of a smile on her lips, yet the eyes of the pale, attractive young woman possess an unusual sadness. 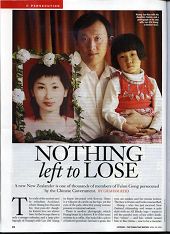 Huang Guohua with his daughter, Kaixin, and a photograph of his late wife, Luo Zhixiang

There is another photograph, which Huang keeps in a drawer. It is of the same woman in a coffin. She looks like a piece of battered porcelain: her hair is gone, the eyes are sunken and the cheeks hollow. The face is frozen and looks mummified.

Huang - who has just received New Zealand citizenship and wears a polo shirt with an All Blacks logo - wants to tell the painful story of his wife's death. Her "crime" - and his, which caused him to flee China - was to be a member of Falun Gong, the [...] group that the Chinese Government has been ruthlessly repressing for seven years.

Huang and Kaixin arrived in New Zealand - a country he knows little about - in January, after being granted United Nations refugee status. He knows that by using his real name he may be courting unwanted attention from Chinese authorities, even this far from his homeland. But, speaking through a translator, he says he now has little left to lose. His wife is dead and his parents in China - also practising Falun Gong members - are harassed regularly anyway.

Tragically his is not an unfamiliar story.

Sometimes referred to Falun Dafa, Falun Gong is a way of living that blends aspects of Buddhism, Taoism, meditation techniques and traditional physical exercises with the teachings of the movement's leader, Li Hongzhi. Li introduced his ideas in 1992 and insisted they be offered free to those who wished to learn. Because of its traditional aspects, Falun Gong had wide appeal for many Chinese. Estimates on membership in China today range from many tens of millions to an unlikely 100 million.

Whatever the true number - a figure of 70 million is commonly accepted but the political climate makes it impossible to ascertain precisely - the movement has grown rapidly. Practitioners testify to its positive effects for their health and general well-being. Though it has a spiritual component, Falun Gong does not consider itself a religion: it has neither places of worship nor clergy. But in a country where only five belief systems are lawful - Buddhism, Taoism, Islam, Catholicism and Protestantism - Falun Gong was never likely to have an easy ride.

Ironically, Falun Gong was originally encouraged by the Chinese Government, which viewed it as a wholesome and moral movement, and approved of its tenets: tolerance, compassion and truthfulness. Li Hongzhi [...] lectured widely.

But seven years ago the ground shifted suddenly. In early April 1999, a provocative newspaper article criticised the movement. When Falun Gong members rallied in protest, many were arrested and beaten. And on April 25, around 10.000 practitioners gathered outside the government's headquarters in Beijing.

The size of the movement - around 100,000 members in Beijing alone - alarmed authorities, who viewed it as further evidence that the Communist Party was losing its grip on the people as it tinkered with democratisation and capitalism. On June 10. the party established an extra-constitutional body - the now notorious 610 office - specifically to facilitate a crackdown on Falun Gong. It now has branches in all cities, villages, government agencies and schools. The next month, concerned at the numbers of government officials, military and police personnel who were Falun Gong practitioners, the party declared the practice of Falun Gong illegal and police began arresting and detaining practitioners.

The Washington Post reported sources saying that "the standing committee of the Politburo did not unanimously endorse the crackdown and that President Jiang Zemin alone decided that Falun Gong must be eliminated". Since then, the government has been hiking up the rhetoric: Falun Gong was first labeled unlawful, then characterized as an evil cult and, more recently, defined as counter-revolutionary, lawyers in China have been ordered not to represent Falun Gong members.

Beijing human-rights lawyer Gao Zhisheng - recognised by China's Ministry of Justice in 2001 as one of the country's "10 best lawyers" - has been under pressure since winning a 2004 case for a Falun Gong practitioner who was illegally persecuted. In January, he barely survived what has been described as a staged traffic accident set up by plainclothes policemen. Repression of Falun Gong in China has been widespread and well documented, often with graphic photographs of tortured victims.

Most of the information about repression and torture of Falun Gong comes - by necessity - from Falun Gong itself or from anti-government sympathizers. The Epoch Times, for example, founded in China [Editor note: U.S.] in 2000 and with editions worldwide, focuses on human rights coverage to the movement. Its reports are increasingly being verified by independent researchers.

A report by the US State Department's Bureau of Democracy, Human Rights and Labor published last month contains a damning catalogue of human rights abuses by the Chinese government: physical abuse resulting in deaths in custody; torture; coerced confessions; harassment, detention and imprisonment of those perceived as a threat to the party or government authority; and forced labour. Estimates of the numbers of Falun Gong adherents who have died in custody as a result of torture. abuse or neglect ranged from several hundred to a few thousand.

Huang Guo-Hua tells his story with deliberation and directness, and an unwavering gaze. He met his future wife in Guangzhou, southern China in April 1999. Both practised Falun Gong. In October of that year, when the government defined "heretical cults" and declared Falun Gong to be one, the couple went to Tiananmen Square in Beijing to join protests. They were arrested and Huang was taken to a prison in his home province where he was deprived of food and made to do heavy labour. Luo was imprisoned for 15 days in Guangzhou and force-fed salt water when she went on a hunger strike. After 20 days Huang was released and rejoined Luo in Guangzhou. They married in April 2000.

In November 2002, police came to their house and found Falun Gong books. The pair were arrested and detained in separate police stations. Huang went on a hunger strike and was force-fed through nostril tubes, which, when first inserted, pierced internal organs.

When police learned his wife was three months pregnant with their second child, she was removed from custody and initially taken to the Huang Pu district for what Huang says was brainwashing, then to a hospital where she was guarded by officers from the 610 unit. His wife's sister learnt where she was being held and visited.

On December 1, the sister saw a policeman run into the room where Luo was detained. The sister assumed Luo had escaped, but on the street, three stories below, lay her near-lifeless body.

As Huang tells it, his wife's body had no broken bones, which gives the lie to the 610 assertion that she jumped. She had insisted the day before that she wanted to live for her baby's sake. She had a severe head injury consistent with a blow. A second injury appeared after she was transferred to another hospital.

She died, aged 29, on December 4, with her unborn baby inside her. Huang, still in custody, wasn't informed until four months later. He saw her body briefly and could identify his wife only by a distinctive front tooth. In December 2003, he was released from detention, having been forced to renounce Falun Gong and watch re-education films. He returned to Guangzhou. The following year he obtained a passport in his home province before fleeing to Bangkok in August 2004. Later that year a friend brought his daughter to him. He applied for and was granted UN refugee status.

Kaixin is suffering greatly, he says. She cries for her mother. It is she who puts the flowers around the sad-looking young woman in the photograph.

As longtime sinologist Professor Barond ter Haar of Leiden University in the Netherlands notes: "The continued perseverance of Falun Gong adherents/practitioners even inside the People's Republic of China in publicly expressing their resistance to the prohibition and persecution of their movement is remarkable, and easily misunderstood as fanaticism."

In March, Falun Gong documented the existence of a secret detention camp in Shenyang City - where organs may be being harvested from live inmates. It's part of the Liaoning Provincial Thrombosis Hospital to which 6000 adherents have been admitted. None has been released. The authors of the report refer to it as a "concentration camp" and compare it to Auschwitz. It is an increasingly common comparison being made by Falun Gong and human-rights monitors.

The preface to the Falun Gong volume on investigations into the persecution of members in China opens with a quote by Nobel Peace Prize winner and humanitarian Elie Wiesel: "Sometimes we must interfere. When human lives are endangered, when human dignity is in jeopardy, national borders and sensitivities become irrelevant. Whenever man or women are persecuted because of their race, religion or political view, that place must - at that moment - become the centre of the universe. "

Harassment of Falun Gong members outside China is widely reported. Members here say that they have been followed and photographed by people they believe to be party spies. Many Chinese practitioners living abroad fear identification will attract the attention of the CCP's international network of spies and lead to reprisals for family at home, or arrest on their return.

Yet in a small unit in Auckland, as his daughter arranges fruit in front of the photograph of his late wife, Huang Gua-Hua keeps talking.

"He doesn't worry about himself now," his translator says. "He wants to use his real name to the truth about Falun Gong persecution in China.

"He wants people to know and believe him."