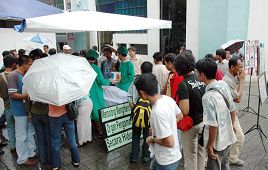 People surround and watch the reenactment of the persecution scene

On the afternoon of April 15, at the busiest area in Kuala Lumpur, practitioners distributed flyers to expose the facts of the CCP's persecution of Falun Gong, and at the same time, clarified the truth to police officers. Many people signed the petition to oppose the persecution.

On April 16, practitioners reenacted the CCP's atrocities of stealing Falun Gong practitioners' organs at the famous tourist site in Kuala Lumpur, the Kuala Lumpur Central Arts Workshop. At 2:30a.m., shortly after the reenactment started, it suddenly poured rain. The practitioners who were doing the reenactment were not affected. Other practitioners hurriedly found some umbrellas to keep rain from them, and at the same time, continued distributing flyers, doing truth clarification and collecting signatures. The practitioners' persistence moved people. Many people came to watch and learn about the truth after the heavy rain turned into a drizzle.

Tomas from Sabah in eastern Malaysia expressed in an interview, "I call upon all people of the country and international community to oppose the CCP's atrocities of harvesting organs from living Falun Gong practitioners. Such violent acts are unacceptable and too cruel."

Izhar from the eastern coast expressed, "I hope that this will be stopped. If I let it continue like this, more Chinese Falun Gong practitioners will die."

Many people signed the petition to support Falun Gong and called upon the international community to pay urgent attention and stop the CCP's atrocities.