(Clearwisdom.net) On the afternoon of March 27, 2006, Falun Gong practitioners and supporters held a rally in Lafayette Park near the White House and commemorated practitioners whose body organs were harvested and remains were cremated in the Chinese Communist Party's (CCP) Sujiatun Concentration Camp. People from Washington, New York, Boston, Houston, California, Australia and Denmark strongly urged the US Government to immediately investigate and help stop the brutal persecution of Falun Gong practitioners in China. 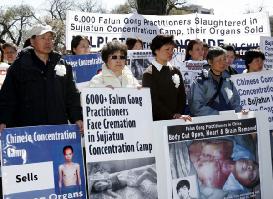 Practitioners at the rally with white flowers on front held photo posters showing practitioners tortured to death and banners worded "Falun Dafa is Great" and "Truth, Compassion, Tolerance" in English and Chinese. Passersby were shocked by the solemn scene and came to learn the facts. TV stations and radio stations, including Reuters covered the event.

A Virginian resident working as an immigration policy consultant for the US government said he had been to China many times and was worried about the human rights there. Upon hearing of the atrocities in Sujiatun, he said that the CCP's crimes are inconceivable. He said he would try his best to have US officials he contacts to know and help end the CCP's atrocities, to rescue those Falun Gong practitioners being imprisoned.

After accepting a handout on Sujiatun atrocities, a senior official in National Press Club invited Falun Gong practitioners to give a speech on the incident and the persecution of Falun Gong, to members of his organization.

At the rally, US human rights lawyer Ye Ning kneeled down to commemorate towards the photo of practitioner Wang Bin who were tortured to death by the CCP (left photo) to express his respect to Falun Gong practitioners.

Mr. Zhihua Hu from New York called on all circles to pay attention to his missing brother, Hu Zhiming. The CCP illegally imprisoned practitioner Zhiming for four years in 2000. Police arrested him again in September 2005. His whereabouts are not known. Mr. Hu asked the CCP, "Where is my brother?"

Falun Gong practitioner and famous tenor Mr. Guimin Guan and his wife Xiaoqun Zou sang a song that he composed two years ago for those practitioners tortured to death, "Let me see you off one more journey." The song tells of the brutal persecution of Falun Gong.

The solemn song shocks everyone and many practitioners on site shed tears.

Ms. Liu, in her 60s, with tears in eye said, "The song reminds me of the fellow practitioners in the same practice site in Beijing who were tortured to death."

Practitioner Ms. Zhang, 76, continuously clarified the truth to the world's people during the last seven years, come rain or wind, cold or hot. She said, "Practitioners suffer these hardships. They are truly compassionate and save sentient beings. It is our biggest wish to have Chinese people know the facts and awaken."

Mr. Chen said, "The persecution against Falun Gong has lasted for seven years. CCP's policy towards practitioners has not changed, 'defaming their reputations, bankrupting them financially, and destroying them physically.' Under such a policy, the CCP can commit atrocities to persecute the practitioners."

Practitioner Jerald Pearman representing the seven Falun Dafa Practitioners' Associations to request meeting with President Bush and called on him to help stop the Sujiatun atrocities and the seven-year-long persecution against Falun Gong in China with all possible means.

CCP's Atrocities Send a Warning to the World

Mr. D.J. McGuire (Virginia), Founder and Executive Director, China e-Lobby, and President of China Support Network, said, "Why do we gather here today? Why in the capital of what is arguably the most powerful nation on earth? Why in what many consider the epicenter of the democratic world?"

"We gather here because Sujiatun is not only an act of unspeakable evil, it is a warning to those in the democratic world of what this regime is trying to hide, and why it feels it must survive to hide it - at any cost. Let us heed this warning, and work together to ensure that it is the democratic world that prospers and the CCP that perishes."

Dr. Morton Sklar, Executive Director of the World Organization Against Torture/Human Rights, Law Professor, Human Rights Attorney, said that when genocide occurs, a death knell calls for everyone, and everyone can be a target of genocide.

Mr. Zhiyuan Wang, representing World Organization to Investigate the Persecution of Falun Gong (WOIPFG), announced that an international investigation committee on Sujiatun Concentration Camp had been established to thoroughly investigate all criminals and bring all criminals to justice.

The rally ended with a chorus "Falun Dafa is great." After the rally, practitioner representatives handed in to the White House several thousand signatures collected during the last few days. 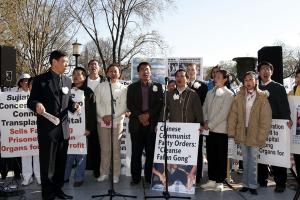