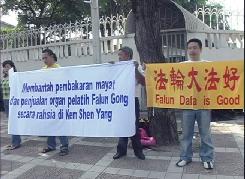 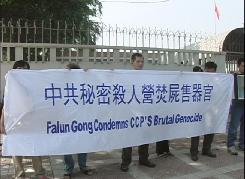 Protesting the CCP's atrocities in front of the Chinese Embassy

Falun Gong spokesperson Yang Sheng expressed that the CCP's criminal acts have committed unpardonable crimes and far exceeded the bounds of human decency. He said, "We call upon the Malaysian government and governments of other countries in the world to see clearly the CCP's evil nature and help stop this most brutal persecution." Yang Sheng also expressed that they would continue holding activities to expose the inhuman and barbaric crimes of the CCP to the public. He said that they would take part in the Asia-Pacific Hunger Strike Relay to protest the CCP's genocidal persecution against Falun Gong.

At present, due to the CCP's pressure on the Malaysian government, the Chinese Embassy has become a sensitive area. The Falun Gong practitioners' protests would always draw a large number of police officers, but the practitioners said that they would take this opportunity to clarify the truth to these police officers and tell them about the CCP's crimes. Yang Sheng said that the police often asked if there was new information and gladly accepted the flyers.

In conclusion, Yang Sheng said that no matter how the CCP wreaks havoc, it will only help more people to learn about its crimes.