Details of the Death of Mr. Xiao Peng, 30, From Yi County, Jinzhou City, Liaoning Province and the Persecution of Whole Family (Photos) 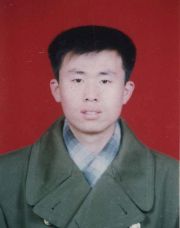 Falun Gong practitioner Xiao Peng was from Yi County, Jinzhou City, Liaoning Province. He suffered brutal torture for eighteen months in Jinzhou City Forced Labor Camp. They released him after he suffered a mental collapse from the torture. He died on June 9, 2002, and he was only 30 years old. His only daughter currently lives with his parents after his wife remarried. 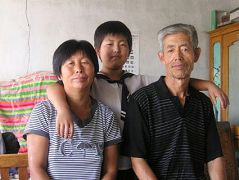 Xiao Peng's daughter with her grandparents

Mr. Xiao Peng was born in 1972 and lived in Jiudaoling Town of Yi County. He was a veterinarian. Before he practiced Falun Gong, he had a rib cartilaginous inflammation that was very painful and eventually caused him to be unable to ride a bicycle. After only two months of practicing Falun Gong, he completely recovered.

Xiao Peng followed the principles of "Truthfulness-Compassion-Forbearance," and improved his moral standard and treated others well. His parents, wife, daughter, three younger sisters and two brothers-in-law all started practicing Dafa one after the other. Xiao Peng set up a practice site at his home and led more than thirty people from the same or nearby village to practice together.

Xiao Peng and his father were both vets in the town. After they practiced Dafa, they helped the village farmers to spray pigs at no cost. They worked hard and tried to help others. For years, the two of them tore up the IOU notes from some farmers that amounted to several thousand yuan.

In July 1999, Jiang's regime started persecuting Dafa practitioners. In late July 1999, eleven people from Xiao's family went to Beijing to peacefully appeal for Dafa. Five of them were arrested and detained in the Fengtai Stadium in Beijing. Xiao Peng was severely beaten by police officers while being detained there. Four days later, they were sent back to Jinzhou City and later to the police station in the city of Jiudaoling. While at the police station, Xiao Peng suffered brutal beatings by police officer Zhang Cunfeng and others. He was then sent to the Yi County Detention Center and detained for fifteen days.

In late September 1999, Xiao Peng and his three younger sisters again went to Beijing to appeal for Dafa. They were arrested at the Tangshan train station and detained in a small room. On September 23, they were sent back to Yi County and immediately detained in the Yi County Detention Center. Xiao Peng was brutally beaten several times by the head of the detention center Wang Yan, prison police officer Bian Zhigang, and prisoner Yang Guotao. Xiao Peng's legs were severely swollen due to the tortures, rendering him unable to use the restroom by himself. The scoundrels poured cold water on him, and poured salty water into his mouth and put a 9 kg (20 lb.) shackle on his feet. On October 29, 1999, Xiao Peng was sentenced to three years of forced labor and was sent to the Jinzhou Forced Labor Camp. His younger sister Xiao Caihong was also subjected to the same tortures. She was detained for forty days. Afterwards the head of the Yi county Political and Security Section, Yang Yuxiang, extorted 3000 yuan from her, and then released her.

On October 7, 1999, other practitioners in Xiao's family went to Beijing to appeal for Dafa. Xiao Peng's father Xiao Yubin and mother Cui Guizhen were detained for 75 days. His younger sister Xiao Caiyan and her husband Zhao Wen were detained for two months in Suizhong City Detention Center. Another younger sister, Xiao Caixia, was detained for fifteen days after the head of the Qianyang Police Station had beaten and cuffed her to a heating pipe for a night.

In May 2002, Xiao Peng's first younger sister Xiao Caiyan was reported to the police by someone in her work unit at the Yiejia Elementary School of Shuizhong County, Huludao City, because she was mailing truth-clarification materials. She was immediately sent to the Masanjia Forced Labor Camp. Xiao Peng's wife Guo Wenying went to Beijing to appeal for Dafa. Shortly afterwards she came back to her parents' home in Qianyang Village, and someone then reported her to the Qianyang Police Station. She was then sent to a detention center. She was detained for forty days and extorted of 2000 yuan.

In Jinzhou Forced Labor Camp, because Xiao Peng persisted in his belief in Dafa, he suffered from many different tortures in the No. 2 Division. These tortures included electric shocks, brutal beatings, being detained in a consolidated compartment, being tied on the death bed, being forced to stand straight for a long time, intensive labor and more. In order to make Xiao Peng write the so-called "criticizing statement," the head of the No. 2 Division, Li Songtao, ordered several people to torture him day and night. Xiao Peng wrote the statement when he was not in a clear state of mind due to the tortures. Once he resumed a clear state of mind, he wrote a solemn declaration stating that his previous statement was void and that he firmly continues to practice Dafa. He was then taken to an empty dark room by division head Li Songtao and police officer Yang Tinglun and tortured with electric shocks while being tied to a metal chair.

One day in March 2001, division head Li Songtao and police officer Ma Yong took Xiao Peng to a one-story house in the backyard of the No. 2 Division. They tied him to a metal chair. Li Songtao and Ma Yong together electrically shocked Xiao Peng's chest, stomach and feet. They didn't stop until the skin on his chest was burned black. Li Songtao and police officer Feng Zibin subjected Xiao Peng to additional electric shock torture in a different room on the first floor of the office building. They shocked him again on his chest, stomach and feet at the same time. He was monitored by several prisoners. When he resisted the tortures, he was tied to a metal chair and division head Li Songtao slapped his face several times and yelled, "Whoever resists is against the government!" After such brutal tortures, Xiao Peng was at the edge of a mental collapse.

One Sunday in early April 2001, when Xiao Peng's father didn't see his son on the prisoners exercise field, he kept questioning and finally was allowed to see his son. When he saw his son, he had been tortured to the point that his father was unable to recognize him.

On April 7, 2001, after suffering eighteen months of brutal tortures, Xiao Peng suffered a mental collapse, so the labor camp sent him home. Since there was no one at home to take care of him, they had to release Xiao Peng's father.

At home, Xiao Peng was sometimes clear minded and sometimes unclear. He was often in a panic. He often hid behind his father and said that some police officers wanted to beat him again. He became very scared whenever he saw a police officer. When it was dark, he would always hold his father's hand and said he was afraid that police officers would come. Soon his condition became worse. His father had to send him to the Kangning Mental Hospital. Later, because of high medical expenses, he had to leave the hospital. On June 9, 2002 of the Chinese calendar, he died at the age of 30.

After Xiao Peng's death, his wife eventually remarried. His only daughter now lives with his parents.

Because Xiao Peng's family members peacefully appealed for Dafa, which was their right granted by the Constitution, the CCP agents broke the family apart. The crimes that the evil CCP has committed toward the Chinese people are too numerous to record.