Vice Chairman of the Board of Freedom House: It is necessary to bring the guilty ringleaders to justice (Photo)

(Clearwisdom.net) On July 21, 2005, several thousand Falun Gong practitioners from across the world held a rally on Capitol Hill in Washington DC to call upon the world's people to help stop the CCP regime's violation of their basic human rights. 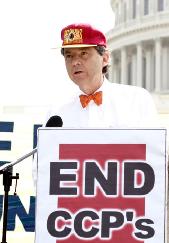 Former U.S. Ambassador to Hungary, Vice Chairman of the Board of Freedom House, Mark Palmer

Former U.S. Ambassador to Hungary, Vice Chairman of the Board of Freedom House Mark Palmer hosted the rally. He stated that the Chinese people still do not have even basic human rights, and they are deprived of their freedom of belief. He praised the Falun Gong practitioners for their persistent pursuit of freedom of belief, and for abiding by the principle of Truthfulness-Compassion-Forbearance. He also expressed that the U.S. government and citizens would stand together with Falun Gong practitioners to help bring about the end of the persecution. The Falun Gong practitioners' tireless resistance will definitely bring about democracy and freedom to China. Mr. Palmer also pointed out that China's political system is actually not a true system, but that it consists of only one or two dictators. He said that it is necessary to bring the guilty ringleaders to justice.

Palmer stated, "As President Bush said in his second inaugural address, 'It is the policy of the United States in every nation to end tyranny. When you stand for liberty we will stand with you. You are the future leaders of your country.'"

Palmer then stated, "For me the lesson of the last year and of the last decade is that people power works, that groups like Falun Gong movements ultimately succeed in bringing justice and tolerance and peace to societies suffering under dictatorships. As Mahatma Gandhi taught us that peaceful movements that draw their cooperation from the leadership can succeed and have succeeded in dozens and dozens of cases without a single shot being fired in removing unjust political systems and dictators."

Palmer also said, "A second lesson we have learned in the last few years is that you need a rallying cause, you need a clear goal, you need something that unites people."

Finally, Palmer emphasized, "I think the Falun Gong has been very, very successful in doing this; it's very important to emphasize that this system in China is not a system. It is individuals; it is above all else ... Jiang Zemin. It is men, only one or two men and they are criminals and we need to bring them to justice. So I think the effort that you all do to bring about court cases, to bring about indictments, to gather evidence for criminal charges, that is a very effective strategy and ultimately it will succeed. So my main message today is one of hope and optimism. I think that history is definitely moving in the world as a whole, in the countries surrounding China and in China itself, history is moving toward democracy and freedom, compassion and justice and we will overcome and we will succeed. And today you will hear from a number of people who are on our side, who are on the side of the cause of the Falun Gong, on the side of the Chinese people."