After His Daughter Was Persecuted to Death, Ethnic Korean Practitioner Cui Zhongxuan Passed Away (Photo)

(Clearwisdom.net) Mr. Cui Zhongxuan, an ethnic Korean Falun Dafa practitioner in Jilin Province, died on October 21, 2004, after his daughter, Cui Zhengshu, had been persecuted to death. Ms. Cui Zhengshu suffered brutal torture at the Heizuizi Women's Forced Labor Camp in Changchun City. She became emaciated and unable to take care of herself because of the torture. She died on August 12, 2003. 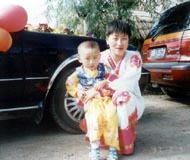 Mr. Cui Zhongxuan was 70 years old and a retired motor repairman from the central grain depot of the Jilin City No. 1 Cooking Oil Processing Factory. Before practicing Falun Gong, Cui Zhongxuan had many ailments, such as heart disease, diabetes, varicosity, high blood pressure, and rheumatic arthritis. He was spending several hundred yuan on medical expenses every month. After Cui Zhongxuan began practicing Falun Gong in 1998 and joined group Fa-study and meditation, he became healthy.

After the persecution of Falun Gong began in 1999, Cui Zhongxuan persevered in practicing Falun Dafa, distributing flyers and clarifying the truth to people. His daughter Cui Zhengshu and his son-in-law were arrested many times. Their home was ransacked, they were sent to forced labor camps and they were harassed by policemen. In January 2000, more than 200 practitioners did the exercises in front of the Jilin City government building. Afterwards, Ms. Cui Zhengshu was sent to the Heizuizi Women's Forced Labor Camp for a year, because policemen from the Criminal Investigation Unit of Chuanying Sub-bureau of Jilin City Public Security Bureau regarded her as an organizer of this public practice. In March 2002, Cui Zhengshu was again arrested by the Jilin City 610 Office and Chuanying Public Security Sub-bureau, and was sentenced to three years of forced labor. The policemen of Heizuizi Women Forced Labor Camp severely persecuted her. Once, she was allowed to sleep for a total of only 22 hours in a span of 33 days. She became emaciated, could not take care of herself, and had difficulty eating. The police were afraid of being held accountable for her death in the forced labor camp, so they sent her home under the pretense of seeking medical treatment on April 18, 2003. After she returned home, although she was carefully attended to by family members, her physical injuries from the persecution were too severe, and she passed away on August 12, 2003.

The death of Ms. Cui Zhengshu had a devastating effect on Cui Zhongxuan. Combined with the added responsibility of taking care of his grandson, it was too taxing on Mr. Cui's health. In July 2004, Cui Zhongxuan became very ill, and he remained so until he passed away on October 21, 2004.