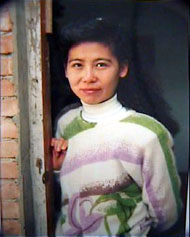 On March 28, Beijing attorney Ni Yulan wrote a letter to thank Falun Gong practitioners for taking care of her in the prison. Because she helped residents in Beijing who were forced to relocate, Ms. Ni was arrested by police on April 27, 2002, when she was taking pictures at the scene. She was beaten so badly by the police of Xinjiekou Police Station in Xicheng District, Beijing that she was disabled. She said that without the kindness of Falun Gong practitioners who took care of her, she could not have survived the year in prison. The following is a transcription of her thank-you letter.

Ni Yulan: This letter is called "A Narrow Escape from Death: My Thanks to Falun Gong Practitioners."

I have been away from Falun Gong practitioners for two years, and have missed these kindhearted people often since I was separated from them. They are the ones who helped me to have a new life. When I was suffering from mistreatment by the police, they took care of me day and night. Because of their benevolence, righteousness and morality, they are always able to establish love and warmth between people. I also built a deep friendship with them in the time that I knew them.

April 27, 2002, was a dark day for me. My greatest misfortune of my life started on that day. At 11:45 a.m., I was taking pictures at the scene of the forced relocation of No.55, Sitiao, Xinjiekou, Xicheng District, Beijing. As I was putting my camera in my bag, all of a sudden, a man and a woman rushed to me like they had gone crazy. They viciously kicked me down on the ground without saying a word. My ankle was seriously sprained by their attack. They took my camera, which was worth US$ 600, away from me and put it into their own bag.

Meanwhile, the director of Xinjiekou Police Station, Xia Liguo ran up to me with some policemen. He did not ask about the robbery, but instead arrested me and took to the police station. Afterwards, I found out that the two robbers were the communist party secretary, Zhang Yulan, and a staff member named Mao Jie from the Relocation Office of the government of Xicheng District, Beijing.

At the police station, station director Xia instigated the vice director, Zhao Xijin, and other policemen to push me to the ground. They bound me tightly with a rope and then started to torture me. They beat me so that I had injuries all over my body. To cover up their vicious deeds, they took me away and hid me in the detention cell in Xicheng Police Station at midnight of April 28. My life was changed forever by those days.

I knew in my heart, however, that I would be safer in detention than with the police because many Falun Gong practitioners were also imprisoned there. They had been kidnapped from all over the nation. They were a group of people who practiced cultivation for both mind and body in order to improve themselves. They believed in Truthfulness-Compassion-Forbearance. They were polite and gentle. Because of their belief, they were often mistreated, suffering physical and psychological torture.

I often saw policemen viciously beat them. The policemen also instigated criminals to beat them. They beat them mercilessly. Falun Gong practitioners often protested the illegal imprisonment by hunger strikes. In order to protect their relatives and friends, they did not reveal their real names and addresses. They were called by nicknames.

When I take a walk with my crutches, many people who notice me ask me, "How did you get hurt?" I tell them, "I am crippled because Xie Liguo, the director of Xinjiekou Police Station, instigated policemen to beat and torture me." They ask me, "How could you survive such a deadly attack?" It is my privilege to tell them: "It was all because of the kindness of Falun Gong practitioners. Without their caring for me day and night, I would not even be able to take a walk with these crutches."

My experience is unfortunate. I will be disabled for life from the torture that I suffered. However, I have built a sincere friendship with many Falun Gong practitioners. For my whole life, I will never forget the benevolence of Falun Gong, and the kindness shown to me. I whole-heartedly thank Mr. Li Hongzhi, who has taught so many to be good and outstanding Falun Gong practitioners.