Indians are the earliest residents of America. Their history can be dated back to tens of thousands of years ago. Consequently, some call the Indians "Native Americans." When Europeans came to America, Indians suffered much injustice and inhuman treatments as they were the suppressed minority. The Native Americans can therefore understand the suffering of practitioners. They have, one after another, expressed their sympathy to practitioners and their outrage towards the unjust persecution. To further clarify the truth to Native Americans, while the Navajo Indians were holding their 37th-annual To'Nanees'Dizi Din¨¦ Fair from October 13 to 16, more than ten practitioners from Arizona, Utah and New Mexico went to Tuba to clarify the truth and introduce Falun Dafa to tens of thousands of the Navajo people. 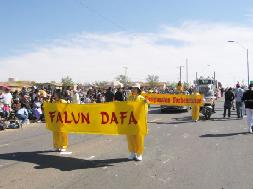 Practitioners decorated one of their cars as a truth-clarifying vehicle to participate in the parade. They hung two small speakers on both sides of the car to play "Pudu" and "Jishi" music. As there was not room in the parade to demonstrate the exercises, a lady sat on the car roof to do the demonstration.

The parade started at 10 a.m. Before and after the practitioners' group were large vehicles with noisy engines. In addition, the vehicles were playing loud rock music. When the practitioners' peaceful group came, the elegant Falun Dafa music was just like a slow-moving creek, flowing through misty woods into peoples' hearts. People were pleasantly surprised and moved their eyes to the practitioners' group. The "Falun Dafa" and "Truthfulness-Compassion-Forbearance" banners and the decorated car with the lady demonstrating the graceful exercises - the scene was so unique and touching...

The exercise movements attracted many people's attention. A great number of people stared at the lady demonstrating them, and some started to copy her movements. More people want to know what this special and solemn practice is and want to know Falun Dafa and the meaning of "Truthfulness-Compassion-Forbearance."

When they saw practitioners distributing fliers, people strived to reach them to get a copy. Some from outside of the circles yelled aloud asking for one or several copies. Some children trailed the practitioners to get their copies. The practitioners of course were so busy that they could hardly meet the requests. On many occasions, one person would take the first copy, and then more people around that person would extend their hands for the materials. Such a scene has not been seen often in the past, and practitioners deeply sensed the aspiration of Indians to Falun Dafa.

After seeing the practitioners' demonstration of the five exercises, many Navajos wanted to learn right away. In about two hours, the class registration form was already full of names. People, old or young, who learned the exercises, were all very attentive and learned pretty fast.

A Navajo followed practitioners' group to the end of the parade and then went to the practitioners' booth. When she was presented with Falun Gong information, she was delighted. She learned the five sets of exercises on the spot, and she could easily cross her legs into full lotus position. When she learned that practitioners were to hold a free class in Tuba, with no hesitation, she registered and wrote down her name and contact information. When asked why she was so interested in Falun Dafa, she said that a well-respected person told her: During the fair parade, only those in yellow can save her. Therefore, she followed practitioners from the parade to the booth.