Some Facts about Huang Xinyu, the Orphan of Falun Dafa Practitioners Mr. Huang Ke and His Wife Zhong Yunxiu (Photos)

(Clearwisdom.net) If there were no persecution against Falun Gong, Xinyu would be like many other kids, enjoying her childhood in her parents' arms. Now when she misses her parents, all she can do is look at photographs of them.

Falun Dafa practitioners Mr. Huang Ke and his wife Zhong Yunxiu both died as a result of the persecution, and their daughter became an orphan when she was less than 6 years old. Xinyu now lives with her grandparents. 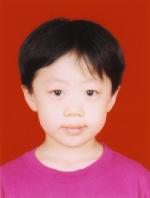 When her mother died, Xinyu was less than 2 years old; she was 5 when her father was tortured to death.

1. The story of Xinyu

Before the persecution started, Xinyu had a happy family.

On July 20, 1999, Huang Ke and Zhong Yunxiu left her at home and went to Beijing to appeal. That was the last time Xinyu saw her mother.

In the week before her mother died, Xinyu had several large ulcers on her tongue and a sore throat, causing her a lot of pain. Possibly the mother and daughter were somehow connected, and perhaps the young girl felt something. According to another Dafa practitioner, once when Xinyu saw someone crying on TV, she said softly, "Mom is crying." Another time, a practitioner asked Xinyu where her mom was, and whether her mom was in heaven, and she nodded her head.

After Zhong Yunxiu died, Huang Ke's work unit refused to let him return to work. Consequently, Huang was staying home and taking care of Xinyu before his death. After Huang was tortured to death, Xinyu was always looking for her dad. When family members told her that her dad had passed away, she appeared to not understand. Shortly after being told, she would again ask for her dad.

Now Xinyu goes to school. She always smiles at Dafa practitioners with whom she is familiar, yet she never speaks to them.

Before his death, Huang taught Xinyu to recite the first two paragraphs of "Lunyu" and some poems from Hong Yin. Xinyu has a very good memory, and she could recite the poems in Hong Yin after being taught only once.

2. The family in misery

Due to an accident, Huang Ke's mother suffers from a mental disorder from many years ago. Huang Ke's younger and only brother drowned when he was only 10 years old. After that, Huang was the only child of the family. Now, his parents have lost all their children.

Huang Ke worked at the same work unit as his father (the Fushun Petroleum Chemical Industry Research Institute). In their work unit, many people were poisoned by anti-Falun Gong propaganda. As a consequence, Huang Ke's father has to bear a lot of pressure due to the rumors and slanderous comments of his colleagues, as well as the pain of losing his son and the extra responsibility of raising his granddaughter.

3. Some facts about Huang Xinyu:

More details are available in these articles:

Young Girl's Parents Pass Away As a Result of Persecution