Chen Dewen, male, was from Chen village of Gejia Township, Suizhong County, Liaoning Province. He began to practice Dafa in 1996. He spread Dafa in the surrounding townships and helped practitioners to study the Fa before April 25, 1999. Under tremendous difficulty, on May 13, 1999, he managed to hold a Fa meeting. On June 20, 1999, Mr. Chen, along with other practitioners, went to Beijing to appeal but were spotted by the village head along the way. He stayed with the village head and asked everyone else to leave. The other practitioners ran away safely.

He went to Beijing to appeal again on October 30, 1999. He was then cruelly tortured in the Suizhong County Detention Center. Later he was sent to Huludao City Labor Camp.

He was treated harshly in the labor camp, and was forced to sit on a bench of 10 cm wide [about 4 inches] and 1-meter high [about 3.3 feet], which painfully left a deep indent in his buttocks.

One time there was a meeting at which traitors [former Falun Gong practitioners who have gone astray due to brainwashing and torture] gave speeches. Many government officials were also present. At this meeting, Chen Dewen stood up and said, "I want to say a few words," right after one traitor had finished his speech. Policeman Liu Guohua was so scared that his face changed color. He held Chen Dewen to his seat. From that time on, he was not allowed to attend any activities.

In the end of November 2000, the labor camp tried to brainwash Dafa practitioners, and distributed materials that attacked Dafa. Chen Dewen stood up to oppose the activity, and as a result was tortured for 4 consecutive days. Upon seeing that a fellow practitioner was too weak to stand up due to severe torture, Chen Dewen came to help him stand up, while he himself was shaking. Chen Dewen fell to the floor afterwards, but then he stood up again and told other practitioners that Dafa disciples could not fall.

In the end of February 2001, the labor camp tried to force Dafa practitioners to wear sports style prison jackets. Because at that time the practitioners' request for those who tortured them to be punished was refused and their request to receive visits was also turned down by the head of the labor camp, wearing prison jackets meant to compromise with the labor camp. Chen Dewen suggested that practitioners not give in. Chen was taken out, striped naked, and forced to put on the prison jacket. With hands cuffed Chen tried to remove it. He was later tortured, and given electric shocks. In response, Chen then went on a hunger strike in order to protest. The labor camp doctor put 500 grams of salt into the corn soup that was used to force-feed practitioners. The four practitioners who were force-fed this mixture coughed continuously, and their facial muscles became strained and deformed. The pain was unbearable. Some fellow practitioner started drinking water, but Chen continued to refuse eating and drinking. His health weakened, he passed away later on after being sent to the hospital. 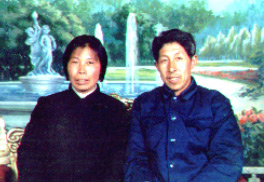 Originally a happy and perfect family

(See detailed report about this case from